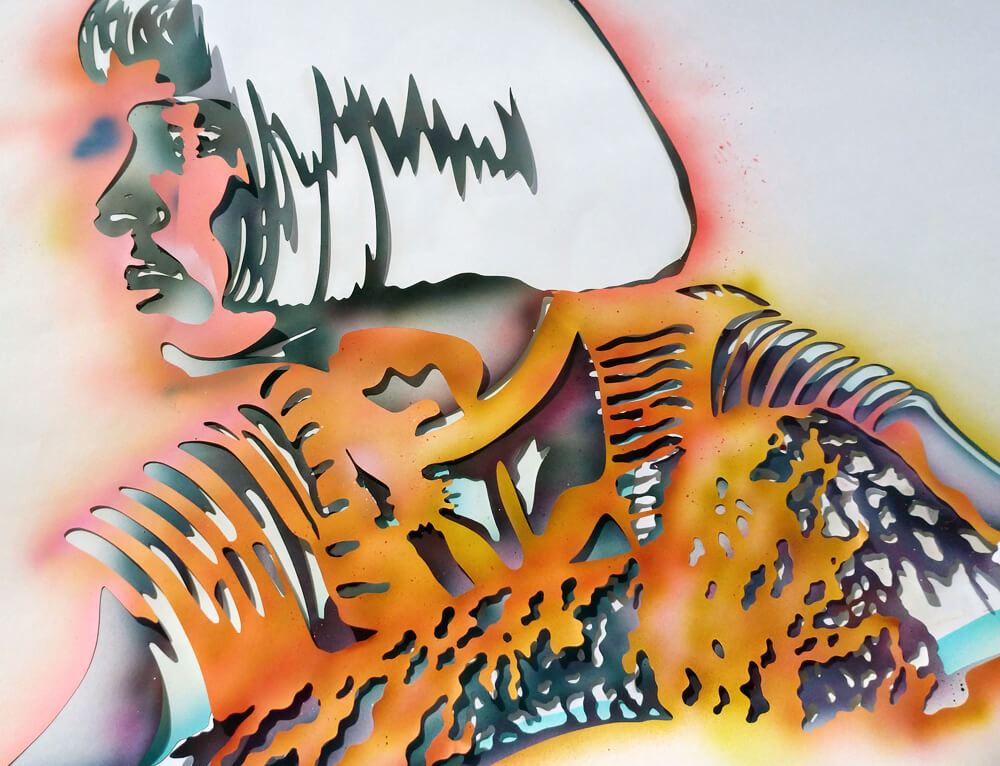 stencil
A stencil is a piece of paper, plastic, or metal which has a design cut out of it. You place the stencil on a surface and paint over it so that the paint goes through the holes and leaves a design on the surface (Collins).

Kansuke has developed his own method of stencilling through trial and error. We recently interviewed him about his working process, specifically his stenciling. If you enjoy this interview, please follow Kansuke Akaike on Instagram @kansukeminamiizu.

— Please tell us about the process of creating your artwork.

In the case of the Mathilda series, I took a quick look at some images and photographs as references and imagined a simple two-tone (black and white) image in my head. The reason that Andy Warhol’s works of art are cool can be attributed to the striking balance of black and white, so I very carefully deliberate where to use lines and where to leave them out. When I create a multi-coloured piece of art, I expand the image of the artwork to explore how to add highlights and neutral colours.

After formulating the whole image of the artwork in my mind, I start making the part of the stencil which will be the darkest parts of the image. The stencil is the key to creating a high quality piece. When drawing a person, the face is the most important part, so I begin by cutting out the eyes with a knife. After that, I cut out the nostrils, mouth, and other parts of the face smaller than they need to be in order to check the placement and balance of the image. Then I enlarge them as needed.

When designing stencils for female subjects, I try to emphasize their best features. Even if the end result is slightly different from reality, I beautify the stencils the same way a photographer would edit a photo, for the sake of the art. I delicately cut out lips to have soft lines. Since the skin and clothes have totally different textures, I also take special care to work on these parts. After making all the stencils, I start the colouring process.

I basically trust and follow my instincts in the colouring process. As I already have a coloured image of the finished piece in my mind, I first try to paint it according to the image. If I don’t like it, I repaint it or blend it with other colours on top to make it look more interesting. I occasionally need more than one session to get the colours right.

When I paint sneakers, there’s no way to redo them, so I repeatedly test out different colour combinations before starting. Once I am satisfied, I move onto the colouring process. The process of adding colours might change depending on what I’m painting. As I am very particular about every step of my process, my art doesn’t lend itself well to achieving immediate results or mass production. 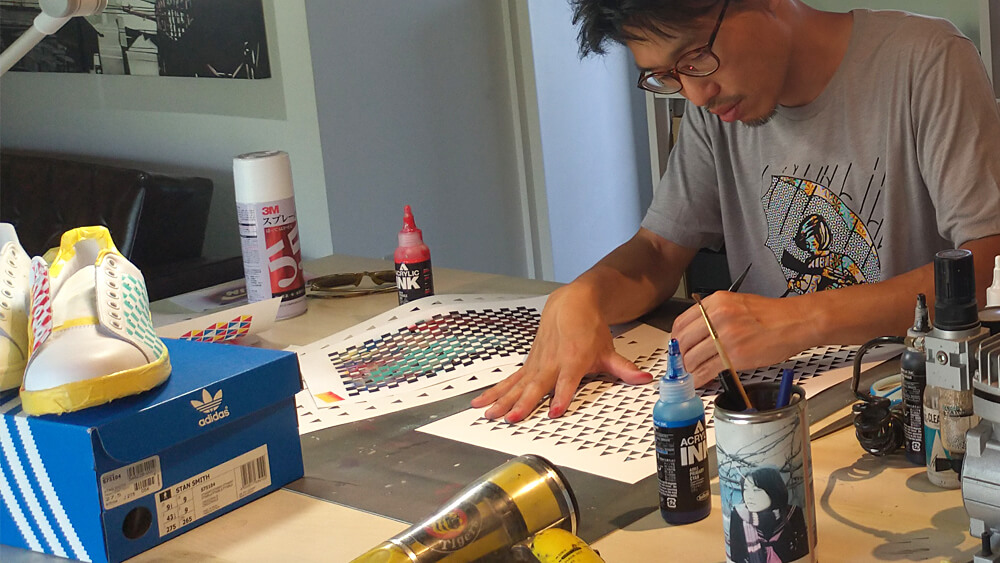 — When you make stencils, you repeatedly cut them out with a knife and throw them away. Is this process similar to sketching with a pencil?

Making stencils is the process of simplifying complicated information into a single figure. For me, my uniqueness and originality are achieved by using this process to make my stencils.

Rather than sketching, it may be more akin to the way that a sculptor slowly strips away layers of clay to create the ideal shape. This part is really intense for me because I’m focusing on cutting precise lines. I really need to focus on steadying my nerves in this part of the process of making the stencil so that the lines I cut are precise, as well as simultaneously deciding on which lines of the shape aren’t necessary in the stencil.

Some stencil art looks like it was created based on a two-colour image that was converted in Photoshop, and I don’t think this kind of art is very impressive to viewers. Stencil art is a technique that enables anyone to mass produce images by just tracing, cutting out a black and white image and spraying onto the stencil.

Therefore, I think that it is vital for artists to personalize their stencils as much as possible in order to create their own signature style. This is how you become recognized as an artist. I don’t think it matters how much time or effort was put into a piece of art, but rather how engrossing the end result is for the viewer. The appearance of the piece is the key for all artists because that’s where they’re able to establish their own style. 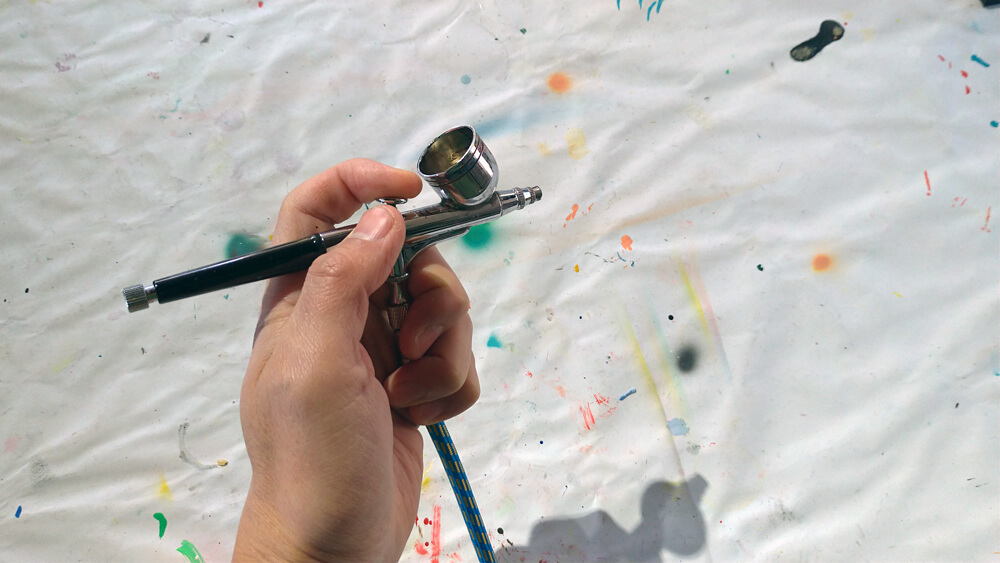 — When painting something using a stencil, spray cans are often used as part of the process. Instead of spray cans, you use an air brush. Do you have any special reason for choosing this particular tool?

When I started stencilling, I used spray cans because I wanted to infuse the rebellious and spontaneous energy of street art onto the canvas.

I later started asking myself many questions like “what kind of art do I want to create?”, “what makes my art original?”, “what would make people more attracted to my art?”, and “what is high quality work?”. I confronted myself with these questions and realized that using spray cans was not suitable to my esthetic. I decided to choose an air-brush instead of spray cans to set myself apart from the crowd.

The principles I use to create art are as follows: 1) Create something exquisite, 2) Be meticulous in my methods, 3) Make it vibrant and colourful. I am still the same person who spent tons of time obsessively drawing the same thing over and over to pass my exams at university, the approach I use now is suitable for me.

As a result of my meticulous process, I received some feedback from art fans that they’d never seen such intricate and stunning stencil art. In addition, my art has gotten a good reputation, even outside of Japan, in terms of the originality that is unique to Japanese artists. Due to these experiences, I was able to gain confidence about my career as an artist.

— You released two versions of Stay Home Art Project including paper and canvas. Does your painting method change depending on the size of the target you paint?

The larger the object to be painted, the larger the area to be sprayed on. This enables me to use a more captivating technique for my art, such as colour gradation. For larger works of art, I challenge myself to add as many fascinating details as I can, wherever there is space on the canvas, by using the most appropriate method. Whenever I make a large piece of work, I want to keep the viewer interested. 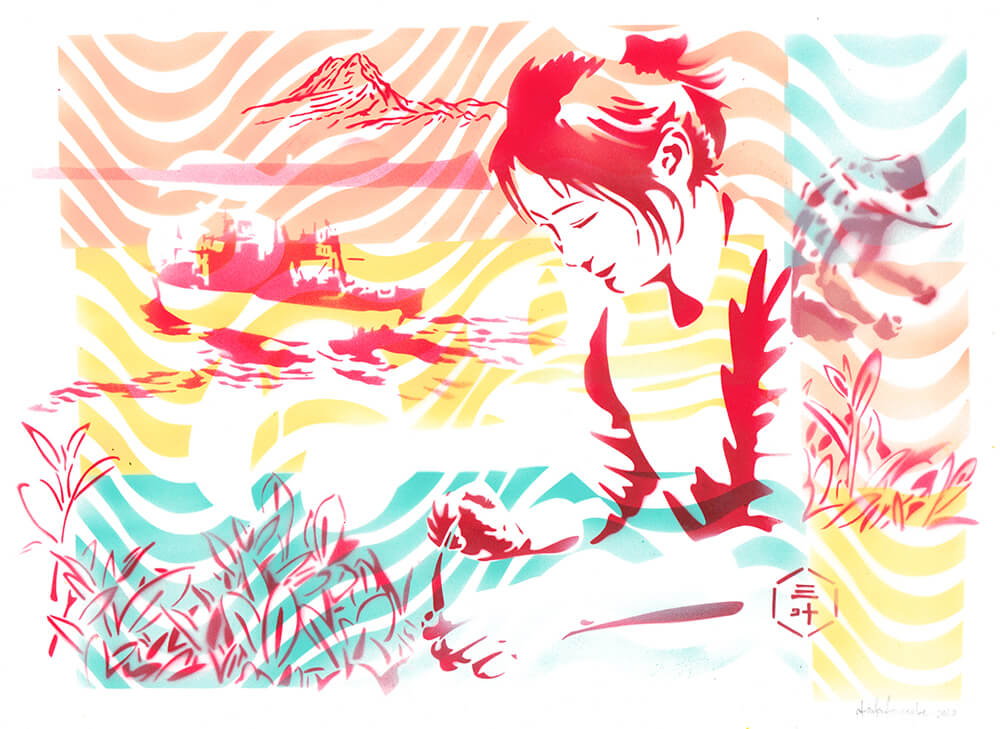 — How would you define the word ‘stencil’ in a dictionary if it were up to you?

I would say, “Do it yourself. Experiment to find your own creative way to use this technique so that your art isn’t a carbon copy of something else. Stop caring what others think. Go your own way.”

— Could you tell us if you have any exciting plans with your art coming up in the near future?

I recently worked on some commissioned works including several portraits and sneakers for well known athletes, musicians and other people working in creative and athletic fields.

When I exhibited my art in Taiwan, I had a chance encounter with a representative for a tea brand called “Three Leafs Tea” who offered me the opportunity to design a series of limited edition packaging.. It was just released this month.

I will also be showcasing some collaborative artworks with kweli surfboards at Flower coffee / Brew bar in Chigasaki, Kanagawa from February 11th to 23rd. And I am planning to open an exhibition event featuring custom sneakers that was supposed to take place last spring.

I am going to move from Minami-Izu to a new place near the city in April, so I’m excited that I’ll have the chance to create art in a new environment. I also look forward to seeing how the new environment affects my creations and the results it brings. Although I am anxious to move to a new place, I feel refreshed, and like my creative power is renewed from the time I spent in the countryside of Minami-Izu. I’m looking forward to moving on to the next phase of my life.